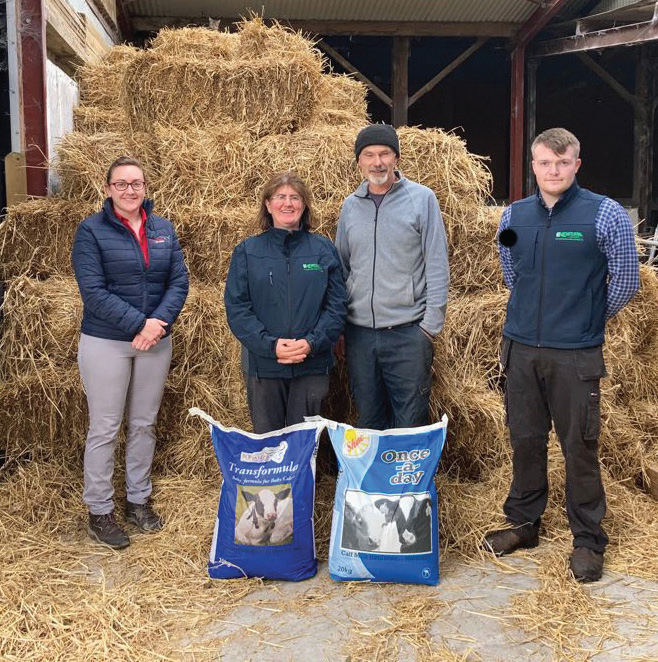 A County Kerry dairy farming partnership is securing the future of its herd with a feeding system that allows it to produce excellent heifer replacements.

Calving at Ted and Liz Horgan’s farm near Tralee starts in mid-January, a time of the year when the weather can present challenges for young calves. Those challenges had previously resulted in cases of rotavirus so the Horgans set out to find a strategy to prevent this from becoming a feature of future calf rearing.

Through Kellihers Feed and Agri Supplies in Tralee, they met Christine Cummins of Bonanza Calf Nutrition to discuss potential milk feeding options. She recommended Transformula, a transition milk replacer which is designed to replace the second milking from cows post-calving; cows often have higher fat and protein during this time and Transformula refl ects this with high levels of skim and higher fat than most milk replacers.

Liz says it has been an excellent addition to the system. All calves receive Transformula for at least the first 14 days, before bulls are sold. The calves are much healthier overall and take to the feed without any issues. “The calves love it,’’ says Liz.

In the first days of life, it is important that a calf’s gut closes and the lining develops to allow its efficient use in the following weeks. Furthermore, the microbial population needs development, with good bugs rather than bad. Providing good bacteria – probiotics – and prebiotics for promotion of good bacteria will help to populate the gut with the desired bugs to enhance effi ciency of the lower gut.

Transformula contains these ingredients in abundance along with antibodies, plant extracts and more to help fight the bad bugs that calf challenge calf health. Liz has noticed how healthy the calves are since she started feeding Transformula. “I can’t get over the difference, the calves are so content and much healthier.’’

Once they finish on Transformula, the heifer calves are reared on Shine Once-A-Day, a lowheat, skim-based milk replacer which allows calves to be fed once daily, providing a very slow breakdown of protein. Calves are very content on this system, remaining healthy and thriving. “I love the consistency of the feed, the cow diet can have no affect when the calves are on a milk replacer,’’ says Liz.

“We have used Transformula for a few years and are thrilled with the results, our calf buyer couldn’t get over the calves when we introduced it to the system,’’ says Liz.

Weaning is at 10 weeks of age and the process is a very smooth one. “We never hear the calves when they are weaning,’’ says Liz. Providing calves with Shine Once-A-Day means that rumen development is promoted, allowing that very smooth transition to postweaning. Dr Cummins explains that it takes time for calves to build up the correct microbes to be able to utilise the concentrate feed going into their system.

“Calves fed once a day will try concentrates from a younger age, not because they are hungry but because they are not hungry.’’ As contraindicative as this may seem, calves on a twice a day system will frequently wait for their milk feed before exploring their environment, Dr Cummins points out.

“If feeding calves at 9am for example, they will typically go for a sleep for some time. “After lunch, twice daily calves will start thinking about their evening feed and wait for this rather than explore their environment but once daily fed calves are content so take the time to explore and play, gaining a taste for concentrates earlier.

“The sooner concentrates hit the rumen and lower gut the better, even if it is just a small bit. The calf will have more time to develop the rumen and, importantly, the correct microbes to utilise the feed it is consuming.’’